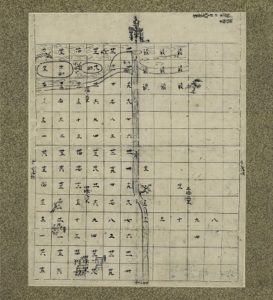 The “Settsunokuni Taruminosho Sashizu” drawing, which was featured in Nos. 26 and 27 in the Stories behind the Hyakugo Archives, was exhibited at the Kyoto Prefectural Library and Archives, in a special exhibition titled “400th Anniversary of Excavation of the Takasegawa River: Takasegawa and Water Transportation in Kyoto”. You may have a question whether it was appropriate to exhibit materials concerning the Kanzakigawa river, a branch of Yodogawa in Osaka, in an exhibition concerning water transportation in Kyoto. We hope that you will understand that these rivers are connected with each other.

While we were preparing for this exhibition, an argument occurred among the staff in charge, as to the identity of the boat depicted in this drawing. 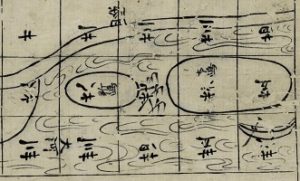 (An extended view of the top left area of the drawing, indicated upside down)

Mr. A insisted that it was a ferry boat, while Mr. B thought that the picture itself was not so decisive. Well, what should we write in the explanation to be placed in the exhibition hall? We were pressed for time, and finally Mr. A’s opinion was adopted, and the explanation was written as “A boat with one oar floats on the river.” But the question was not actually answered.

The Toji Hyakugo Archives contain volumes titled “Nijuikku-kata Hyojo Hikitsuke”. They consist of minutes of meetings (“Hyojo”) held by “Nijuikku-kata”, which was an in-house organization of Toji monks. An article dated October 13 in the volume for 1463 (Item 36 of Tenchinobu) mentions Taruminosho. It is written in this article, “渡船のこと治定なり。他領と寺領、毎月15日つつ渡すなり。仍て船賃毎月廿疋なり。只今は入道、取の由、申す者なり。その段、披露しおわんぬ。” This reports that an issue concerning ferry boats has been resolved, where Enoki Keitoku, the Daikan (local magistrate) for Taruminosho, had ferry boats travel to and from Juhachigo on the southern bank of the Kanzakigawa river. The focus of the dispute was the days and fares of the ferry boats. Three years before the above article, when he was asked about ferry boats by Kumon of Toji, a person in charge of distributing land tax from Shoen (manors), Enoki Keitoku answered that there were no ferry boats in the estate of Toji (Item 121 of Box-CHI(Katakana)). Therefore, it is considered that Enoki Keitoku and others started the ferry boat service during this period (*1).

So, ferry boats did travel between Juhachigo and Taruminosho in 1463, when said Sashizu was drawn, and Mr. A’s opinion seems reasonable. Let’s listen to Mr. B, then.

(An extended view of the top right area of the drawing, turned 90 degrees to the right)

Therefore, Taruminosho Sashizu is a diagram related to land inspection. The purpose of land inspection in 1463 was to identify increase or decrease in the area, compared to Hamami in 1386. Their primary interest was in farm fields. The Sashizu also mainly indicates the blocks and areas in the estate. In other words, the temples, the shrine, trees as land features, boats as a mode of transportation, and other items were drawn as accessories in the diagram. Next, let’s look at how the boat is drawn. Because a beam is drawn inside the boat, it must have had a certain size. One line is drawn across the boat, indicating not an oar, but a pole, Mr. B insists.

We cannot yet determine whether the picture indicates a ferry boat or not. Let’s listen further to Mr. B’s opinion.

What is your determination? Do you support Mr. A, Mr. B, or still another view? Ezus are exciting materials that can be interpreted in many different ways.

*1 Hori, Yoshitake. “Kanjin and Development by Enoki Keitoku”, Vol. 4, Part 49, Bulletin of the Graduate Division of Literature of Waseda University, 2004.