The back of paper is called “Shihai (shi: paper; hai: back)” Characters are sometimes written on Shihai.

This story is focused on Shihai of the document mentioned in “24. History recorded in drawings” in the Stories behind the Hyakugo Archives:

After being terribly troubled by the invasion of manors by Jito (local master of manors), Toji divided its land into the share for Toji as the Ryoke (owner and lord of manors) and the share for the Jito, and stipulated that the two parties should not interfere with each other’s shares, thereby seeking resolution of the issue. The document above was written in the late Kamakura period, indicating that an agreement concerning the division of land was reached between the Zassho (local representative who collected land tax for Toji) and the Jito-dai (deputy Jito). You can see that some characters are written in the left corner and at the lower center of Shihai.

In the left corner, it is written “栄実和与状 (Eijitsu Wayojo)”. “Eijitsu” is the Zassho for Toji, and “Wayo” means reconciliation. So the summary of the text on the front side is indicated here.

At the lower center, a statement “為向後証文、所加封判也” is written, together with the titles, names, and Kaos (signatures) of two representatives. These representatives were Bugyonin at the Kamakura bakufu (Kamakura shogunate), who handled trial proceedings, etc. The statement at the beginning is a legal authorization of the reconciliation between Toji and Jito. 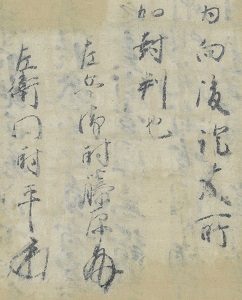 Based on the context above, we can consider that, following the land division, Toji reported the agreement made between Zassho Eijitsu and Jito-dai to the Kamakura bakufu, and the document was returned to Toji after authorization by the bakufu.

In this way, the statement, names, and Kaos of authorization were required on the Shihai for Wayojo to be legally binding. It was also necessary that the letter of settlement (“Saikyojo”) authorizing Wayo should be issued by the bakufu. 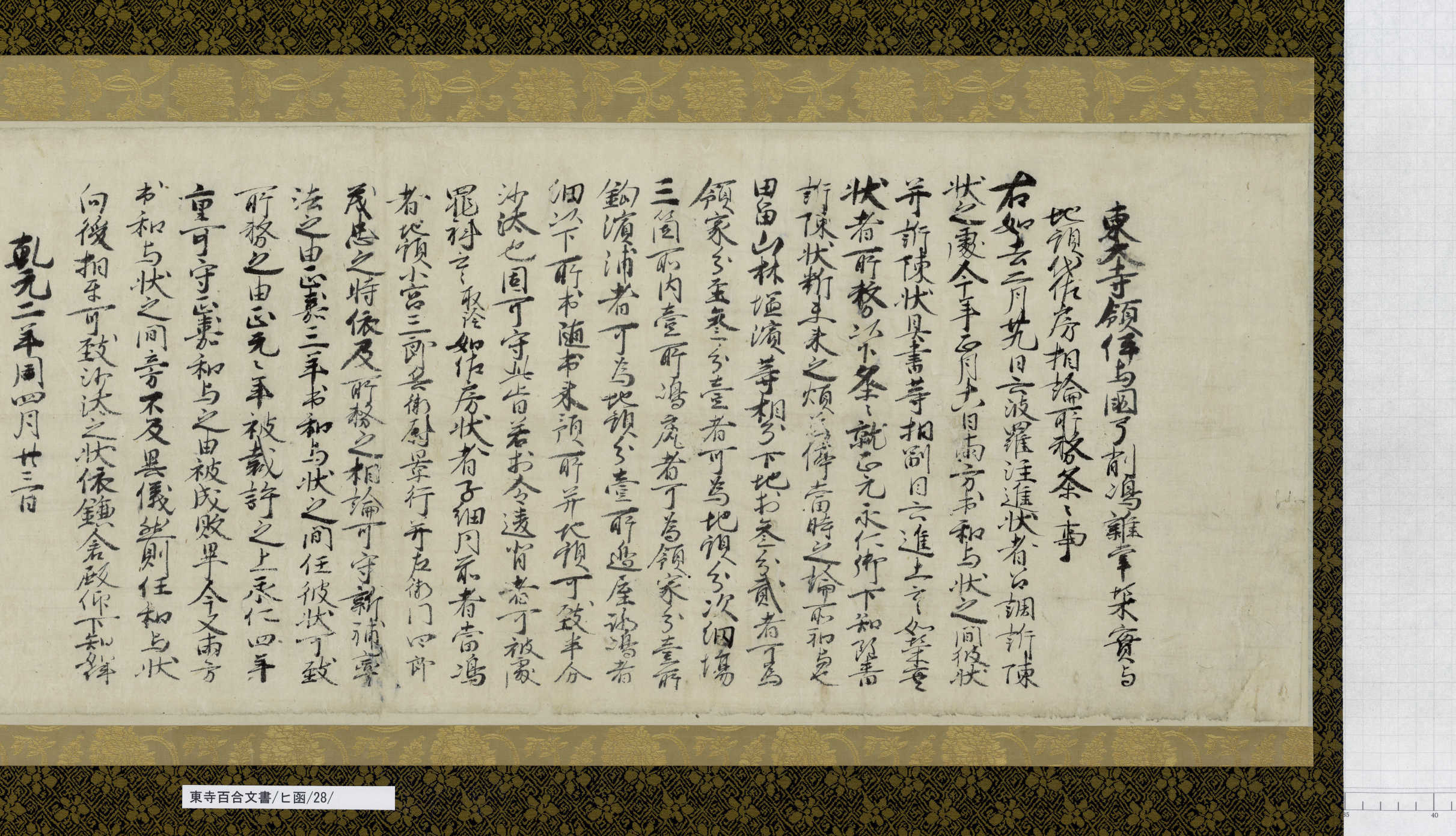 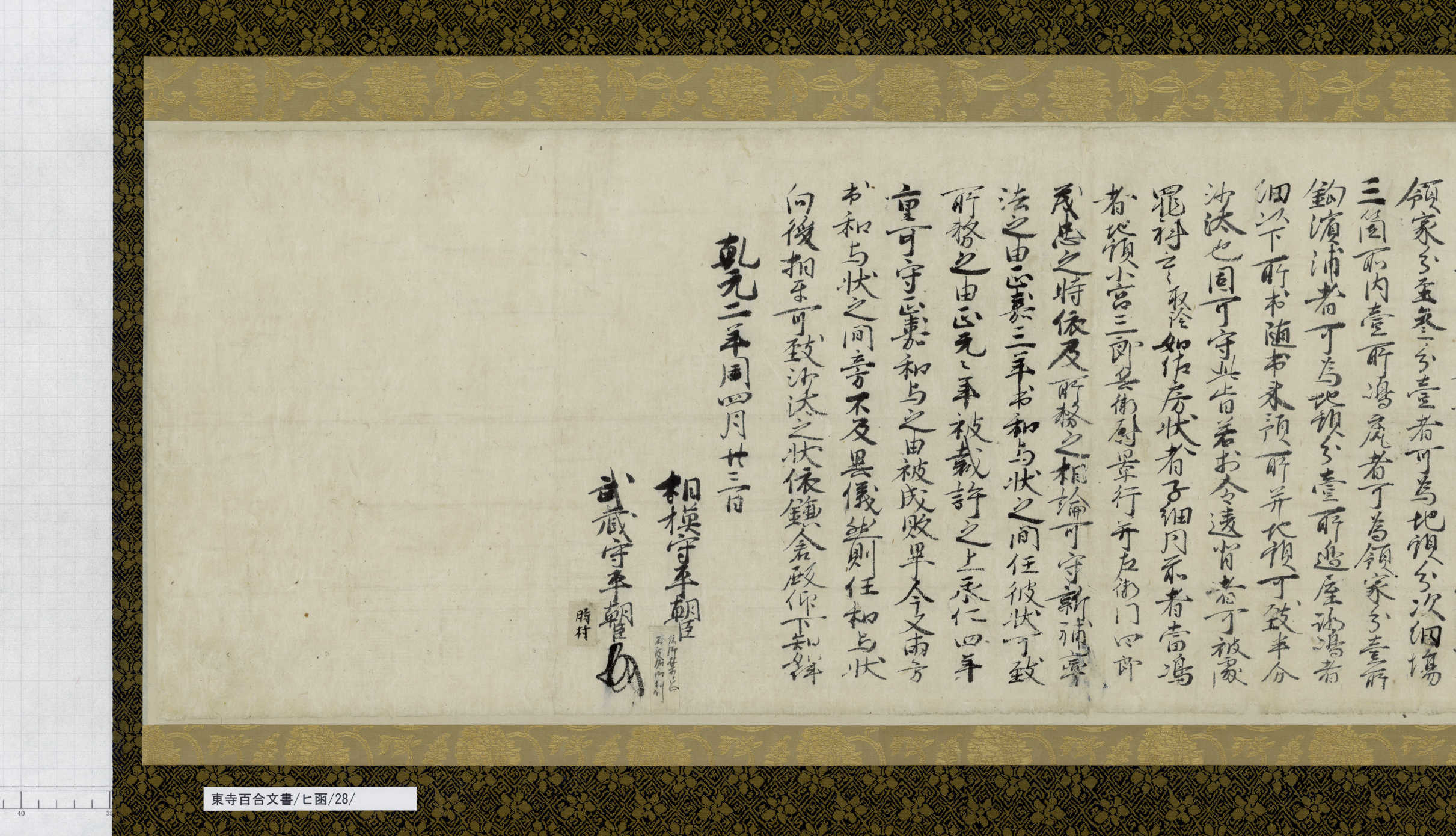 The above is a Saikyojo. It contains three writing errors.

First, “東大寺 (Todaiji)” at the beginning of the first line is of course a mistake for “東寺 (Toji)”. The small circle written at the left bottom of the letter “大” means that this letter should be deleted.

Similarly, “細場” at the end of the ninth line and “細以下” at the beginning of the twelfth line are respectively mistakes for “網場” and “網以下”.

Next, keep the locations of these mistakes in mind, and look at the Shihai.

A small Kao is affixed in each of the three locations, playing the role equivalent to correction seals that are used in the present Japan. This Kao is identified as one of the Kaos that were affixed to the Shihai of the Wayojo indicated above. Probably this person served as a secretary.

In conclusion, you can see another Kao of a different person on the seam of paper, apart from the three small Kaos. This was affixed by Hojo Hisatoki, who served as one of the directors at “Hikitsuke”, a court for the Kamakura bakufu. It seems that the reconciliation in question was authorized under the responsibility of Hojo Hisatoki. 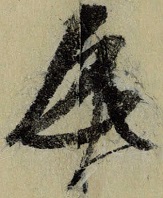